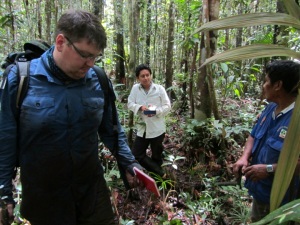 Testate amoebae have been successfully used as indicators of past changes in peatland hydrology, particularly ombrotrophic (i.e., nutrients derived exclusively from precipitation) peatlands of north-temperate and boreal regions.  Over the past couple decades, many ecological studies of testate amoebae have been performed in these northern bogs, allowing empirical relationships between community composition and surface moisture to be described. Because the shells of testate amoebae preserve well in the acidic and anaerobic environment of bogs, these modern relationships have been used to infer past changes in the relative wetness of the bog surface from the composition of subfossil communities.  Much recent work has focused on the validation and interpretation of testate amoeba paleohydrological records from bogs, and their application to pressing global change questions. 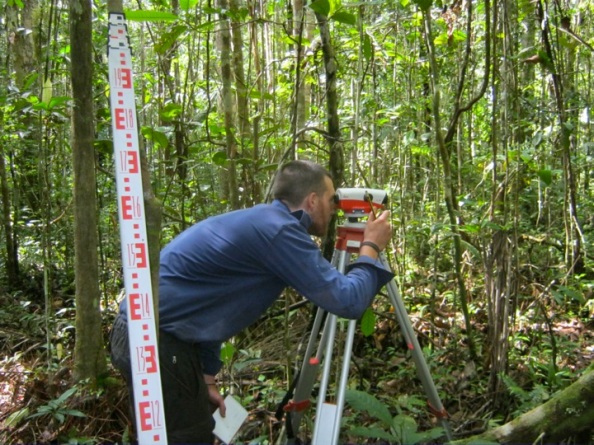 Surveying along a transect across the peatland.

However, very little is known regarding the potential paleoenvironmental applications of testate amoebae in tropical peatlands.  Peatlands in this region contain a large reservoir of soil carbon, and are extremely vulnerable to environmental changes including changes in land use (e.g., drainage, deforestation) as well as ongoing climate change. How have these peatlands responded to past environmental changes? How similar are communities of testate amoebae in these systems to those of northern bogs? Can testate amoebae be used as indicators of past hydrological changes in tropical peatlands? A recent study by Swindles et al. published in the journal Microbial Ecology set out to find preliminary answers to some of these questions.

The study examined the present-day testate amoeba communities on a ombrotrophic peatland in Peruvian Amazonia. Surface samples of testate amoeba communities and measurements of water-table depth, pH, litter-moisture content, vegetation, and loss-on-ignition were taken along a transect across the peatland. The field work sounds like it was challenging, as the authors succinctly noted that the orientation of the transect had to be a bit flexible given certain obvious constraints:

A slight change in direction was needed half-way along the transect to avoid working in an area containing snakes.

Clearly the work was not well suited for ophidiophobes.

The research group also collected a peat core from the site and assessed changes in testate amoeba communities for the last several thousand years, using the results of their modern survey to inform their interpretation of the paleoecological record.

Results of the study indicated that the species composition of testate amoebae on this tropical peatland was most strongly related to measurements of water-table depth, with secondary relationships to pH. Forty-seven testate amoeba taxa were encountered, including one species only found in the southern hemisphere. Some taxa were clearly diagnotic of particular habitats (e.g., pools on the peatland surface). Testate amoebae were also preserved in the peat core,  and the authors applied the results of their modern study to infer changes in past water-table depth for approximately the last 3000 years. Although there is clearly much more work needed to describe the ecology of testate amoebae in peatland systems of the tropics, the results of this work indicate good potential to use testate amoebae in paleoenvironmental studies of these important, vulnerable, and unique peatland systems. Hopefully more work will follow soon.