Fashion phenomena strongly influence our societies. These phenomena mostly affect young people and can be very worrysome. Many sociological studies seek to understand these phenomena, based on community background, culture and society tendencies but none seem to have considered a simple possibility: are our young people not just copying nature?

Mixotrophic testate amoebae are species able to combine two nutrition modes; phototrophy and phagotrophy (predation). Using light energy thanks to their algal symbionts, mixotrophic testate amoebae are able to fix inorganic carbon through photosynthesis, whilst in parallel they are also able to assimilate organic carbon by feeding on prey items such as bacteria, fungi and other protists (2-5). This mixotrophic energetic mode thus gives them an important trophic advantage when food resources are low.

Most mixotrophic testate amoebae show different characteristics, with for instance, different body sizes, shape and test composition. However, visually under the microscope, it seems that all of these species choose their algal symbionts in the same shop, copying each other! Probably intrigued by such fashion phenomena, Gomaa et al. (1) investigated the genetic diversity of the algal symbionts harboured by several mixotrophic testate amoeba species such as Archerella flavum, Hyalosphenia papilio, Heleopera sphagni and Placocista spinosa. These analyses showed that most algae found in testate shells shared the same kind of gene sequence (ribulose- 1,5-bisphosphate carboxylase/oxidase), thus revealing a close genetic proximity (1). The phylogenetic analysis further placed all surveyed testate amoebae symbionts close to Chlorella variabilis, a species known for forming symbiotic relationships with the ciliate Paramecium bursar (6). However, the authors also underlined that it is probable that some other endosymbiotic species occur in mixotrophic testate amoebae. Some symbionts morphologically clearly differ from C. variabilis in shape and colour, in particular within genus Placocista (Figure 1).

The modalities of symbiont acquisition by mixotrophic testate amoebae are still poorly kown and would require more investigations. Who is copying whom? Did Archerella flavum make Hyalosphenia papilio jealous with such nice colours in its shell leading the latter to feed on it to steal these nice coloured symbionts (Figure 2)? Is Placocista spinosa a weak copy of Archerella flavum and Hyalosphenia papilio, selecting its symbionts from a cheaper shop? Many questions remain unanswered. Could some of these require a sociological approach? 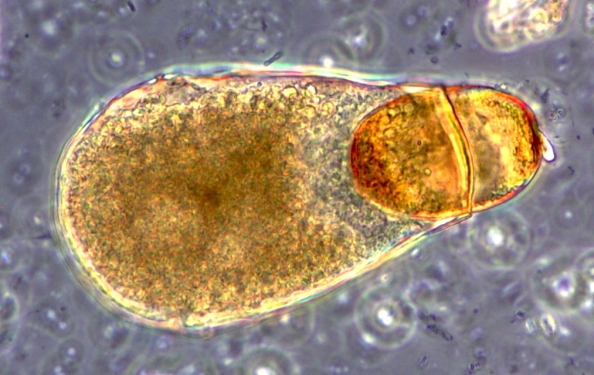