Silicon is the second most common element in the Earth’s crust (after oxygen) and the seventh most abundant element in the universe. That means we can find silicon almost everywhere. Silicon plays a pivotal role in diverse living organisms comprising pro- and eukaryotes accumulating biogenic silicon in various siliceous structures (= biosilicification) – like idiosomic testate amoeba shells. In soils of terrestrial ecosystems we can find a lot of biogenic silicon forming different silicon pools. These pools can be separated into zoogenic, phytogenic, microbial and protistic ones (Fig. 1).

However, what is the relevance of biogenic silicon pools for silicon cycling? To understand this, we have to look at biogeochemical cycles at a global scale. Globally, silicon and carbon cycles are connected by weathering processes and fluxes of dissolved silicon from terrestrial to aquatic ecosystems (e.g. Sommer et al. 2006). When silicon is washed away into the oceans, it is used by marine diatoms for frustule synthesis (frustules are the siliceous cell walls of diatoms). Due to their worldwide distribution in very high abundances, diatoms are able to fix carbon dioxide (CO2) on a large scale (about 20 % of the photosynthesis on Earth is carried out by diatoms! See, e.g., Armbrust 2009). By consuming atmospheric CO2, diatoms thus have an effect on climate change, which is mainly caused by increasing atmospheric concentrations of the greenhouse gas CO2 since 1750 (IPCC 2013). The fluxes of dissolved silicon are affected by organisms that synthesize siliceous structures and consequently accumulate and recycle biogenic silicon in soils. In other words, the more silicon that is fixed in terrestrial ecosystems, the less silicon that arrives in the oceans, and as a consequence diatom production in the oceans decreases. Let´s visualize the main aspects of the processes described so far (Fig. 3). 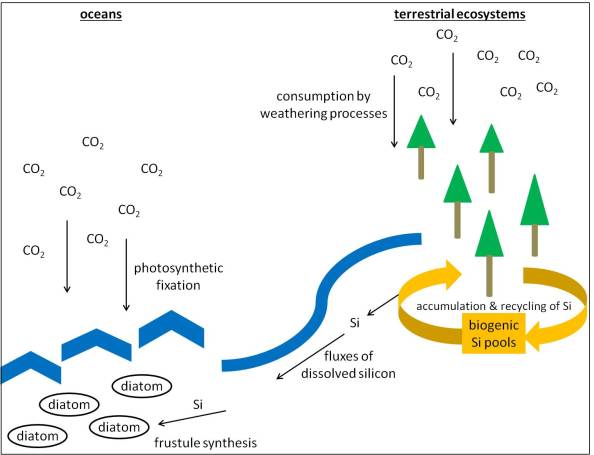 Fig. 3: Connections of global silicon (Si) and carbon (C) cycles and the influence of biogenic silicon pools (see descriptions in the text).

Annual biosilicification rates of living testate amoebae (17 kg – 80 kg silicon per hectare) in forested ecosystems were comparable to or even exceeded reported data of annual silicon uptake by trees. Just imagine it! Unicellular, microscopic organisms can out-compete multicellular, macroscopic ones in terms of annual silicon uptake. Given the worldwide distribution of testate amoebae, the importance of idiosomic silicon pools and corresponding biosilicification for (global) silicon cycling becomes clear.