By Edward A. D. Mitchell,

With the advent of high throughput sequencing, estimates of global diversity are being totally revised.  For us protistologists – arguably much more importantly – so is the picture of how diversity is distributed among the different branches of the tree of life. The image that emerges is one that shows a huge unknown diversity among protists, at all levels, from major groups (i.e. “environmental clades”) and within known groups (i.e. from more or less divergent groups to complexes of cryptic and pseudo-cryptic species). This is fascinating and to say the least mind-boggling and a much welcome development for making a case about the need to study protists more intensively. It is indeed impossible today to ignore this diversity and the many functional roles that protists play in all ecosystems.

But this unknown diversity also calls for a massive investment in taxonomy. And as we all know there are only few active protist taxonomists. We therefore need to train a new generation of taxonomists to meet the huge challenge of keeping up with the novel discoveries resulting from molecular studies. And indeed, combining molecular and traditional microscopy approaches is the key to doing this job properly.

But there is also an often overlooked but important aspect of taxonomy, besides the critically important fact that descriptions need to be done correctly in order not to make a huge mess of nomenclature: naming a species. Choosing an appropriate name is indeed not always easy. Should we name a species after an esteemed colleague, the geographical location where the species was found, a morphological feature of the species, or should we try to find a name that also allows non-specialists to relate to the species – thus providing an excellent opportunity to increase the impact of the finding and making a broader audience aware of the sheer existence of our beloved amoebae?

I firmly believe that witty names are useful. They make us happy, allow many lively discussions to take place among colleagues and are much appreciated by journalists always keen to report on “something completely different” (Monty Python, 1971).

The choice of names tells a lot about the personality and cultural references of the author. Here are three recent examples among testate amoebae:

This genus of hyalosphenid testate amoebae is characterised by an elongated neck (Kosakyan et al., 2012). The idea for this name came to me while riding my bicycle (a great source of inspiration!). I knew about the existence of some African tribes that used metal necklaces to elongate the necks of woman (allegedly, if the woman cheated on her man he would remove the necklaces and she would die due to cervical spine injury). I did a bit of research on this and found out that there were two unrelated tribes using such necklaces, one in Africa, with independent circular necklaces piled on top of each other and one in Asia (Padaung – https://en.wikipedia.org/wiki/Kayan_people_(Myanmar)), with a single spiral necklace. The latter corresponded much better to the shape of the amoeba shell and hence we decided to choose this name.

At the time of writing this post there were 1’110 hits for Padaungiella in Google. 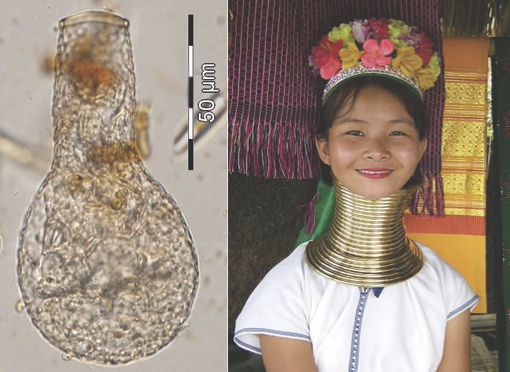 This species was named after Gimli (http://lotr.wikia.com/wiki/Gimli), a dwarf in Tolkien’s Lord of the Rings saga (Singer et al., 2015). This dwarf wanders in forests during the saga, something dwarfs are not supposed to do much. This species being the smallest of the species complex and being found in forested bogs the name seemed appropriate. Newspapers as far as Austria wrote about this. http://www.krone.at/wissen/amoebenart-nach-figur-aus-herr-der-ringe-benannt-in-torfmoor-entdeckt-story-497678.

At the time of writing this post there were 188 hits for “Nebela gimlii” in Google.

This large Arcella species bears striking resemblance to Gandalf’s hat and thus logically was named after this even more famous character of the Lord of the Rings (Féres et al., 2016; Tolkien, 1954) (http://lotr.wikia.com/wiki/Gandalf).

Arcella gandalfi (left, from Féres et al., 2016) and Gandalf, as played by Ian McKellen in The Lord of the Rings triology, (right, source: http://lotr.wikia.com/wiki/Gandalf).

The media picked up on this story even more and this illustrates again how a well-chosen name can significantly contribute to making our field of research more visible.

“Arcella gandalfi” has 31’600 hits on Google at the time of writing this post. To this date, news agencies in more than 15 countries reported on this, including: Brazil, USA, Germany, France, Russia, India, Mexico, Spain, Turkey, Argentina, Hungary, Indonesia, Croatia, South Korea, Ukraine.

Who’s next? There’s no end to the fun!

Tolkien, J.R.R., 1954. The Fellowship of the Ring, The Lord of the Rings, Boston. Ballantine Books, New York.

2 thoughts on “What’s in a name? Something (completely different) to be said about taxonomic nomenclature”